The Council for Aboriginal Reconciliation was established in 1991, and during the Decade of Reconciliation they worked to establish widespread public participation, and create community awareness and ownership of the reconciliation process.

In 1994 OWN members the late Noreen Hewett, the late Ruth Layard, and Lucy Porter started the Aboriginal Study Circle, meeting twice a month, to follow the “Australians for Reconciliation Study Kit” and use the “Open Learning” program on the ABC, as guidelines.

Our aim was to study the history, customs and culture of Aboriginal and Torres Strait Islander peoples, and to spread this knowledge amongst associates and friends, so that a better understanding and appreciation of First Nation peoples could grow amongst us, and in the wider community, leading to a shared sense of truth, fairness and justice.

Our motto was Listen, Learn, Understand.

The circle quickly grew into a dynamic group of older women, both Indigenous and non-Indigenous, working together. Betty Little, a wonderful Yorta Yorta woman soon “sorted us out” on the group’s name. “We’re sick of being studied” she said – and we became the Aboriginal SUPPORT Circle. (ASC-OWN).

After completing the study kit, we invited older Aboriginal women as guest speakers, to tell their stories and to join us in a shared lunch. Some guest speakers were elders who had been stolen from their families as children, some were brought up on missions, and some were professional women who had overcome immense difficulties.

We attended rallies, lectures, art exhibitions and book launches in connection with Aboriginal affairs, and became members of the Women’s Reconciliation Network, Women for Wik, as well as ANTaR (Australians for Native Title and Reconciliation) and the “Sea of Hands” and Tranby National Indigenous Adult Education and Training College. (Photo opposite of Monique, Betty Little and Pat Zinn at “Sea Of Hands”).

In 1998 the ASC was honoured to receive an award from the NSW Council for Aboriginal Reconciliation, in recognition of its “creative involvement of women in Indigenous issues and events.” Lucy Porter successfully applied for Senior’s Weeks grants in 1994, 1995 and 1997, so that we could hold gatherings of Aboriginal elder women of La Perouse, and we actively supported the National Aboriginal History and Heritage Council (NAHHC) to acquire for permanent ownership the Australian Hall in Elizabeth Street, where in 1938 a landmark national Indigenous protest took place.

As well as Betty Little, artist Brenda Saunders who had been the guiding force of NAHHC also became a valued member.

We were also joined by Yorta Yorta woman Lorraine McGee-Sippel, whose book “Hey Mum, What’s a Half-Caste?’ won many accolades and awards, and has been reprinted.

In November 2003 Linda Burney, then MP for Canterbury, launched at NSW Parliament House our anthology of Aboriginal women’s stories “Steppin’ Out and Speakin’ Up,” with an emphasis on the three R’s of Indigenous existence – Relationship, Respect and Responsibility.

This was Lucy Porter’s inspiration, and she and the late Meg Coulson supervised the 3-year project.

Lucy obtained financial and in-kind support from various charities, and sales of the book raised $10,000, which was donated to Tranby College to fund a Lynn Pollack scholarship for female students.

Lynn was an outstanding member of the ASC, totally dedicated to Reconciliation. Too ill to attend the launch, she died in 2004, deeply mourned.

Since moving to Newtown, those of us still active meet to attend art exhibitions, lectures and other events, and afterwards we discuss current events and information over tea or lunch.

We have always attended Survival/Invasion Day celebrations on the 26th January and the Coloured Diggers wreath-laying events on ANZAC Day, and we continue to do so.

We have always raised money to support Aboriginal organisations, such as Baabayn Aboriginal Elders at Emerton, Seed (Aboriginal and Torres Strait Climate Coalition), and in particular the Kool Kids Club at La Perouse, which works with the local schools to deliver free after-school and holiday activity programs for young people aged 7-13 years, focussing on improving social health and well-being, connection to country and promoting strength and resilience.

Ninety percent of the children are Aboriginal and there is a waiting list. With generous co-operation from Sydney OWN, we are still able to respond to requests for funds.

We keep in touch with each other, and what is going on in First Nations affairs, sharing information and links to media via emails and phone calls.

Our grateful thanks go to OWN’s office staff for their unwavering assistance and support. 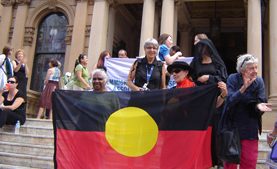 Uluru Statement from the Heart

The Aboriginal Support Circle supports the Uluru Statement from the Heart.

“We, gathered at the 2017 National Constitutional Convention, coming from all points of the southern sky, make this statement from the heart:”

The Uluru Statement calls for structural reform including constitutional change. Structural reform means establishing a new relationship between First Nations and the Australian nation based on justice and self-determination where Indigenous cultures and peoples can flourish, and we all move forward.

The Uluru Statement builds on the strong history of Indigenous advocacy for a better future. Gathered in Central Australia in May 2017 on the 50th anniversary of the 1967 referendum, First Nations forged a historic consensus on structural reform and constitutional change.

OWN NSW has established the Pat Zinn Scholarship in memory of our dear, past member Pat.

100% of the donations will go towards the educational expenses for Aboriginal students. The scholarships will be administered by the Aboriginal Education Council. Please make your donation using any of the methods outlined in the scholarship below. DO YOU WANT TO FIND A GROUP TO JOIN? STAY INFORMED? VOLUNTEER? ATTEND AN EVENT? DONATE?

Find out today how you can get involved and shape the future of older women in Australia.

We would love to hear from you.
Any enquiry is welcome and we value your contribution.